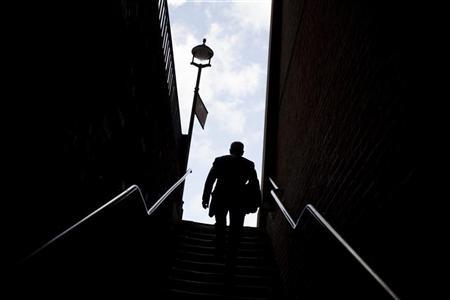 A man climbs a stairway in a narrow alley in Temple Bar, the legal district of London, July 30, 2009. REUTERS/Kevin Coombs

(Reuters.com) - It is a common gripe among business travellers: how to fill that dead time pre- and post-meetings without sitting for hours in coffee shops.

Hotel managers have similar bugbears. As well as their rooms sitting empty at night, there are also all those non-monetised hours between early morning check-outs and late check-ins to fret about.

Though regular corporate clients do sometimes request daytime stays at hotels, and are given special rates, such deals are rarely advertised and most individual travellers would not be aware of such a service.

Enter Paris-based start-up DayUse, an online reservation service allowing people to rent a room in luxury hotels from 11am to 5pm.

With boutique-style hotels signed up across Western Europe and in New York, the year-old firm sets a flat rate for daytime use of a room, which is on average between 30 to 70 percent less than the rooms' fluctuating 'rack rate'.

But whereas top-end hotels are unlikely to advertise themselves as a destination for a by-the-hour visit, working with a third-party to increase their revenue during a time when rooms are empty appears to be a no-brainer - so long as their main night business is unaffected.

By-the-hour hotel use carries certain connotations, but the idea that DayUse is mostly used for clients looking to carry out illicit affairs or romantic liaisons with a loved one is disputed by its co-founder and director Thibaud d'Agrèves ... for all markets except Paris anyway.

In France, he concedes, the DayUse market is mainly 'romantic'. With the current (financial) crisis, there's nothing to do about business in Paris.

d'Agrèves told Reuters that his service comes into its own in London for day-tripping businesspeople who, when visiting London from Europe for a late afternoon meeting, tend to catch an early Eurostar train and then wait around in coffee shops and the like.

In New York, because many European business travellers who have been visiting cities across the U.S. depart from the east coast hub, a comfortable hotel 'day-caytion' before an evening flight home might be just the ticket.

In the UK and the US, travellers and businesspeople mostly use it, says d'Agrèves. They can have a shower, prepare for their meeting and relax.

The Town Hall Hotel in London's hip Bethnal Green, east of the City, signed up to the DayUse programme in January. The hotel's sales manager Michael Benjamins explains that though he was initially trepidatious to see if his property could manage the operational side - housekeeping, for example - it has worked seamlessly.

We monitor the DayUse guests as we must make sure we don't get the wrong sort of clients through the door, but so far we've had no problems, said Benjamins.

Since Town Hall Hotel begun its association with DayUse, Benjamins says they have received a marked increase in direct bookings for the 11am to 5pm slot.

We offer these direct bookers the same rate. But DayUse's online presence is a benefit for us.

Still a small operation, DayUse currently sees 1,500 registered reservations per month in London. To expand their UK business, the company are offering a set of packages to appeal to leisure travellers which feature gastronomic and sports and wellness offers, while an office package includes free internet usage.