8 ways the travel industry is changing in 2017

From iConcierges to hotels by the hour, here are eight things you should check out before checking in! 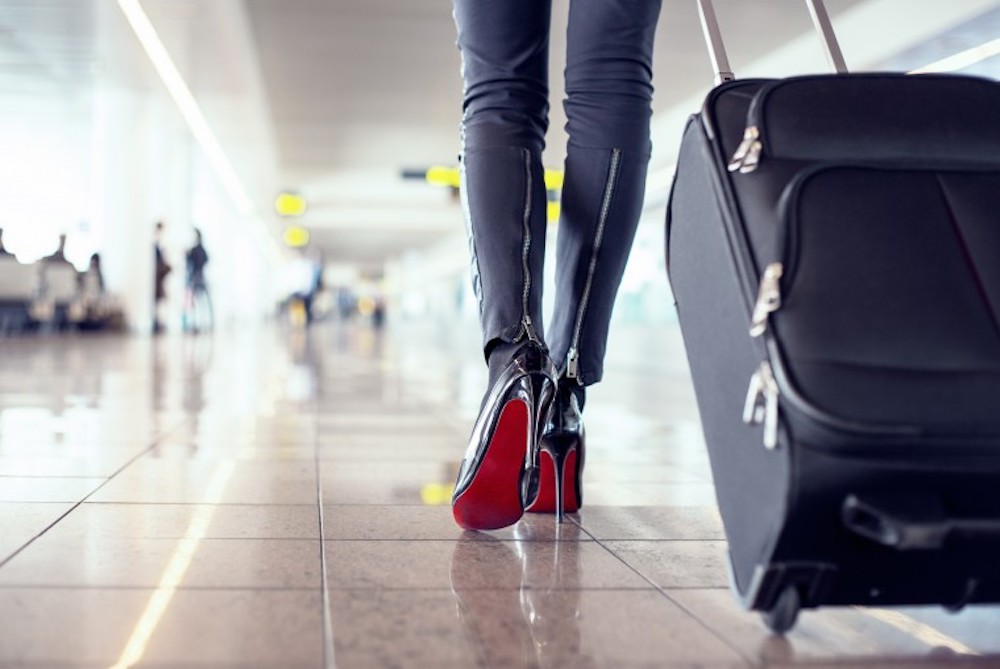 So long to people seeing dollar signs. Nowadays they see airplane, backpack and Madagascan flag emojis in their dreams. Yes, we now live in the experience economy where consumers would much rather invest in memorable travel experiences that make them feel connected to the world around them, like they are part of something larger than themselves, than material items that give them fleeting satisfaction. According to a study by Topdeck Travel, 86% of millennials today would rather experience a new culture compared to 44 percent who prefer to party and 28 percent who prefer to shop.

So, how has the experience economy flipped the travel industry on its head like a downward dog yoga pose at one of these hip airport gyms that are all the rage? From iConcierges to hotels by the hour, here are 8 things you should check out before checking in!

For past generations, travel was merely an added perk to the job. Maybe you’d attend a conference in another city once a year as an initiative to bring offices together under one roof. These days, travel is so ingrained in the job itself that “willingness to travel 50% or 75% of the time” is spelled out in job descriptions. Employees jet-set around globe on the daily to attend meetings, close deals, scout trends and be living, breathing cultural observers for their company.

Stay a While, in Style!

Given that travel is no longer a hobby to pursue outside of work hours but rather an all-encompassing lifestyle, accommodation is no longer seen as a place where someone’s head hits the pillow for a night, but rather an extension of the place they’re visiting. Tablet said it best. “You don’t just sleep in a hotel, you live there, for a night or two, at least. And while you’re there, you’re not just getting used to a different pillow, but trying on a whole different life—inhabiting a new space, eating in a new restaurant, drinking in a new bar, checking out your traveling companion (or yourself) in different lighting, against a new interior-design backdrop.”

On that note, what’s the best way to get the best of both worlds — enjoying a more immersive, personal experience and all the perks of room service?

Hotels and apartments that one can rent out on a monthly basis, just like a local!

Sure, the thought of extended-stay hotels (a.k.a. apartment hotels), often incites a mental orchestra of groans as highly functional but overly dismal accommodations for business people or families between home aren’t the most aesthetically pleasing. Well, prepare to wipe that dreary image from your mind completely, as a number of properties have recently hit the market that offer topnotch service and style.

Obviously back when AirBnB was launched in 2008, the hotel industry was infuriated, but now it seems they’re taking a leaf out of its book. Tapping into the ‘digital nomad’ trend of people increasingly working anywhere, these new extended-stay hotels caster to the need for flexible move-in and -out dates and saving money by not paying to keep an apartment when you’re not sleeping there.

No leases. No security deposits. No long-term commitments.

Think AirBnB, but with less of the legal troubles and existential expansion problems—a system that takes the control from private residence tenants and giving it back to themselves.

Enter StayAwhile. As a membership-only network of hotels and furnished apartments around the world, travelers can come and go as they please for a flat monthly fee. Only in town for a few nights? No problem, as the club allows members to pay only for the nights they use and even store their personal belongings like a real home away from home. Slated to roll out its memberships in NYC, Miami, Amsterdam and Paris during Spring 2017, an additional 25 are then expected to follow in major cities in Europe, Latin America and the U.S.

This nomad living model isn’t the first trailblazer of its kind. Similar concepts have been popping up all over the world, such as WeLive, from the founders of the co-working space WeWork, that offers furnished apartments with communal spaces in NYC and Washington D.C.

Philadelphia’s Roost Apartment Hotels in Midtown and Rittenhouse Square offer Midcentury Modern units equipped with a Bosch washer and dryer, Apple TV and Sferra sheets. With the in-house bike-share program, guests don’t even need to order Ubers to get around town!

Hollywood’s Proper Residences in Los Angeles offers one- and two-bedroom suites kitted out with professional-grade kitchens and private plunge pools. Guests can indulge themselves at the rooftop pool, open-air yoga patio, and coffee and wine bar.

Hotels By the Hour (or Minute!)

Ever wanted to rent a hotel for a few extra hours to get some pressing work done before a flight, without forking out dough for an entire extra night? Now you can, thanks to hotels that are offering rooms by the hour or the minute!

The HotelsByDay app and website enables guests to reserve rooms in four- to nine-hour blocks—typically between 10am and 4pm. Inventory consists of three- to five-star hotels, mostly in U.S. and Canadian cities.

Another app coined Recharge makes upscale hotel rooms— four- and five-star properties in the Bay Area— available at the last minute, for 66 cents a minute (around $40 an hour).

Apps have you covered on the global front too. Global micro-booking service Dayuse has an inventory of more than 2,000 hotels in 15 countries, featuring various Quality Inns and Best Westerns and other upscale options.

The Rise of The iConcierge

As I mentioned in my last article, with wearable technology and digital concierge services becoming ubiquitous, today’s traveler wants the best of both worlds: to govern their own experience and enjoy five-star service. And now, thanks to the new “invisible service” trend we’re seeing in the travel space, they can receive top-notch customer service without ever having to interact with another human being.

Aptly named Lokal, a new six-unit boutique hotel in Philadelphia plans to make their guests feel just that: like a local. Slated for launch in March, the hotel will be introducing “invisible service” for guests—in other words, providing the usual amenities found in a hotel, but attempting to do so in a way that makes guests feel like they are actually living in the city rather than experiencing it through the eyes of a tourist. Unlike the conventional circled must-see sights on a map that hotel concierges tend to offer, guests will find a carefully curated guidebook in their room that offers tips to all the insider, off-the-beaten-path dinner, drink, shopping and adventure spots.

Sea-bound travelers are in for a real treat too, as they no longer have to hail down a waitress, pay at an actual cashier desk or savor entertainment from performers in the flesh when they’re next on a cruise ship. The world’s largest cruise company Carnival has recently announced the launch of a novel “wearable concierge service” coined the Ocean Medallion, which will operate as a room key, tap-to-order room service, restaurant reservation check-in, portable mini-game console and personalized entertainment experience.

Sick of having to waiting ages to get the attention of bartenders? In downtown Los Angeles last month, Marriott International showcased a drink dispenser where guests could use their smartphone to order cocktails. The hotel has also implemented a Marriott Rewards app that lets guests chat with a concierge before they arrive at the hotel.

Great news for social media addicts too! Hyatt has taken to Twitter by implementing a @HyattConcierge handle where the 24/7 guest-service team will respond within 15 minutes.

Commune Hotels & Resorts is following suit by enabling their guests to e-mail or SMS to communicate with the hotel.

Taking this digitized customer service trend to a whole new level, Hilton launched Connie, a two-foot-tall AI-powered robot concierge in March at the their Tysons Corner, Virginia store. The robot can answer simple, common requests like, “What time does breakfast start?”

Not staying at one of the big chain hotels? Porter & Sail has you covered. The city-guide app is used at independent hotels, offering picks curated by distinguished locals (musician Moby, chef Alan Stewart), and available at more than three dozen properties worldwide, including Soho Beach House, in Miami, and London’s Zetter hotels.

Airport Services are Taking Off (Excuse The Pun!)

More often than not the food consumed and the boredom induced at airports makes travelers shudder. And I don’t think I’m alone in saying that when a flight is delayed, jetsetters often question how they’re going to survive another two hours in the bleak abyss of overpriced news stand snacks and crowded powerpoint hubs. Well, thanks to new state-of-the-art recreational airport experiences, soon you could actually be begging for your flight to be delayed, just so you can enjoy the trendy airport amenities!

A recent PSFK article explored how a refined focus on wellness in the travel industry may very well be the next normative trend in airport facilities. Flyers today can now enjoy airport gyms and yoga rooms in addition to balanced food options featuring local, organic meals.

Baltimore Washington International Airport opened the ROAM Fitness gym in early February that features free luggage storage, options for renting workout clothes/shoes, showers and an attendant who monitors guests’ flights and will even alert them if there’s a delay.

Dallas-Fort Worth International Airport houses an in-house yoga studio as well where guests can utilize free mats, a walking path and two 55-foot staircases for extra cardio opportunities and Minneapolis’ St. Paul International Airport where flyers can stretch their legs on the airport’s 1.4 mile walking track.

As travelers are seeing the world in Instagram squares and filters these days, hotels are catering for this by intertwining art and backgrounds into their hotels just for the ‘instagrammable moment’. At the Renaissance Blackstone hotel in Chicago, a gold lamé couch is an Instagram-ready seat.

Lobbies to Work, Not Wow

Why Venture Far When You Can Indulge at a Hotel Bar?

In the days of old, hotel restaurants and nightlife spaces were “last resorts” for busy professionals who don’t have time to leave the confines of their drabby hotel. Well now the hotel restaurants and bars themselves are the main attraction for guests to stay in the hotel in the first place, with Michelin star chefs and innovative dining experiences.